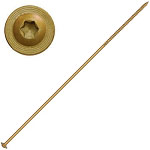 Read the story about the crazy idea that ended up taking the whole world by storm.

Today the WINBAG is a world-famous tool, which is being used for all kinds of applications on building sites, in auto repair shops, in the manufacturing industry, military, on film sets, in hospitals - and even as precise levelling equipment in the nuclear particle accelerator CERN. But the beginning wasn't that easy. It all started on a building site where an installer was struggling to put in some very big and heavy windows by himself. He needed an “extra hand” and a way of adjusting and holding, which inspired him to the idea of the WINBAG concept. Air under pressure is both powerful, precise and gentle. So, he headed off to the nearest patent office and thought success was imminent.

From idea to production to sales:

But like thousands of inventors before him he soon realized how much hard work that was ahead of him. All details of the WINBAG had to be developed from scratch as nothing like this existed at the time, it had to be produced on equipment which had to be built for it and finally when all of that was done – it had to be sold.

He spent much time visiting the established tool manufactures all of which acknowledged his enthusiasm but didn’t really see a market for this type of product. Finally, he met a smaller manufacturer with whom he made an agreement and then it all slowly took off.

But the beginning was tough. Most customers were more than skeptical to begin with - nobody had ever seen anything as crazy as this, looking like a whoopie cushion meets blood pressure equipment. Honestly probably most industry professionals would feel a bit embarrassed to be seen with such a gadget.

So, the inventor had to hit the road himself and visit end-user after end-user to show how it worked and how much time the WINBAG could save everyone for a great number of applications. Demonstrated like this everyone he met bought immediately and soon thereafter the company began hitting trade shows all over the world gaining huge traction.

Since then millions and millions of the original WINBAG has been sold into a wide variety of industries such as construction, industry, roadside assistance, auto repair shops, the health sector, aerospace and many more.

The WINBAG has won some of the most prestigious awards there is, such as the Best Product of the Show on both IBS (International Builders Show) and the National Hardware Show. WINBAG was also awarded the RED DOT Award – the ultimate award there is within global product design.

It has featured on almost all popular DIY TV shows and can be seen in many Hollywood movies as well.

Why a Smiley as Logo and why the strange name?

Many customers have wondered why the WINBAG has the easy recognizable Smiley as logo instead of something a little more traditional. The answer is simple – the inventor and the company behind the manufacturing and distribution are 100% anti mainstream. They seek to stand out – like their products – even when everyone thinks they are a bit strange.

The name is a mix from WINdows, WINners and the word BAG – easy as that. That it then also rimes with something completely else is a pure coincidence ??

WINBAG is a registered trademark.

The WINBAG family is growing:

It is not many products that has kept the exact same measurements and design since Day 1. But the Original WINBAG has stayed unchanged and is still the version which is the most popular.

Today there are also other versions available like MINI, MAX and CONNECT. These will eventually be showcased and made available on StarFastenersPlus. So stay tuned :-)

Click here to see the video showing how WINBAG can be used, different features of the WINBAG and testimonials from people:

Click here to watch the video showing pictures of the WINBAG in use received from satisfied users on our social media channels:

Find out more about WINBAG below - click on the products and go directly to the website. Right now we have the WINBAG on sale!